The world of academic library science is shifting. With the advent of the internet, ebooks, online university classes and e-readers, academic libraries serve different functions than they did only a few years ago. In 2014, those changes are even more pronounced – particularly along certain library management trends.

In this time of upheaval in traditional library models, academic librarians need to consider what the top libraries in the country are doing and adapt appropriately to keep their academic library relevant.

The Harvard University Library System is centered in Widener Library in Harvard Yard and comprises of over 80 individual libraries holding some 15 million volumes – not including digital library materials and academic databases. According the American Library Association (ALA), Harvard University has the largest academic library in the United States and one of the largest in the world.

Students pour into Harvard and its library system every year for one major reason: the notoriety of the best academic experience possible. However, it’s not just the name. As one of the world’s most premier academic libraries, the Harvard University Library System has capitalized on the following three academic library trends:

Harvard is currently investing more into its library technology (book scanners, databases, mobile devices, etc.) than ever before to keep up with changing student demands and expectations. This commitment to having the newest and latest technology at students’ fingertips is what keeps Harvard competitive.

Your library: Students demand the best tools for academic research in order to maximize their college education. So, enhance your library with newer technology in order to make sure their expectations are met. However, upgrades don’t require a Harvard budget: the right library book scanner works with student-preferred mobile devices and decreases paper and ink usage from copy machine printing.

While no academic library receives the same number of interlibrary loan (ILL) requests as Harvard, it’s a new reality of 2014: Interlibrary borrowing has almost tripled since 1990. With the right ILL software and technology solutions, many libraries have lent more and more of their tangible and digital library materials to other students and patrons around the world – allowing every academic library to establish Harvard-level authority in their lending.

Your library: From 1998 to 2008, resource sharing (including ILL) has increased 54% between academic libraries. The best way to prepare for this rising 2014 trend is to ensure you have the best software that is compatible with major ILL services like OCLC Article Exchange, ILLiad and Odyssey. Also, for international lending, double check that your library book scanner creates searchable PDFs in up to 189 languages and is recognized by Optical Character Recognition (OCR) technology.

Your library: In the 1998-2008 ALA study, student usage of ebooks and full-text online content skyrocketed, even while physical library usage rose as well. Keep pace with this continued digital content usage with the right library book scanner that turns your print media collection into virtually unlimited digital copies for student usage online and on mobile devices. Not only does a book scanner maximize your existing print collection, but it also prolongs the life of rare and aging texts.

While no academic library becomes like the Harvard University Library System overnight, in the digital era, advancing your library to an Ivy League level is much easier. Capitalize on these three library technology trends in 2014 and prepare your students with an academic education built for the future.

Is your academic library prepared for future student needs? Click the button below to download the free report from Scannx and keep up with the next-generation of library users. 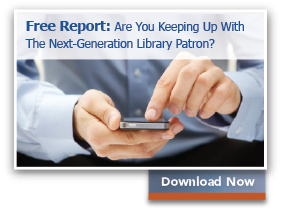