The Importance Of Library Evolution: Learning From The Past

We’ve talked a lot about the future of the library and how the digital age is greatly impacting the evolution of learning as well as library technology and services. With all of this discussion about the future, it’s only fitting that we dive into the past and take some cues from our predecessors in understanding the importance of library evolution.

After all, the digital age isn’t the first game-changing era to alter society. Libraries have been around since 1200 B.C. They have faced much more troubling times than the age of the iPhone – and have gracefully withstood them.

New technology is undoubtedly intimidating. But, think back and recall library evolution in the midst of ancient cities, world wars and industrial revolutions. In your efforts to adapt to the changing times, there is much to be learned from the past.

The Beginnings Of The Library

Over 5,000 years ago, the earliest civilization known to man was recording information. Without an official language established, the Mesopotamian people wrote in pictograms on small stone tablets. This type of language was referred to as cuneiform. Early scribes of Mesopotamian cuneiform reveal knowledge of trade, astronomy and even literature. The ancient city of Mesopotamia contained vast, worldly knowledge, yet the foundations of a managed educational system had not yet been created.

The first library in the world – and one of Egypt’s most valued landmarks in ancient times – the Library of Alexandria was initially established in dedication to Egypt’s nine goddesses of art. The library quickly evolved from a center for the most elitist, philosophical minds of the century to a managed institution for scholarly work and educational programs. Thus, the library was born.

Between the founding of the Library of Alexandria and its peak of success, Alexandria Callimachus developed the first library cataloging system: six main divisions of poetry, five divisions of prose and a third division for miscellaneous categories. The concept of the library spread. In early Rome and Greece, as architecture became a booming, innovative industry, cities honed in on library design.

The expansion of libraries as institutions flourished. By the years of the Roman Empire, public libraries were some of the largest buildings in the city, and they had gained a certain prestige. Libraries were now places to learn and be educated, with an organized management system in place and boasting magnificent interiors.

Once libraries were established in their primary organizational functions and viewed as architectural masterpieces, they began focusing on growing their book collections. The Ulpia Library was one of the most well-known Roman libraries, as well as the longest lasting. It was said that the Ulpia Library held over ten thousand scrolls.

These ancient cities played a large role in the formation of libraries as official institutions and learning centers. But, perhaps even more transformative than the library itself, were the services offered within. As the library became a household concept and civilizations began placing more emphasis on education, innovative learning tools were developed at a more rapid pace.

The early 1800s graced the literary world with the magic of a steam-powered printing press. At the time, this concept was revolutionary (and, in a sense, marketing was born.) In fact, the printing press was one of the very first innovations of the Industrial Revolution.

It wasn’t long before “Industrial” became “Technological.” IBM captivated (and complicated) the world in 1953 with its introduction of the PC. The digital age had begun. As PCs began gaining popularity, so did all things digital. It was a foreign concept to many: the idea of learning and accessing information through digital mediums – but its impact was profound.

Inkjet printing was introduced in the 1970s, and the first flatbed scanner came out in 1975. The millennial years have seen the emergence of such services as digital scanners, scan-to-mobile technology and cloud-based technology. Blossoming technology is now booming technology. Expect this age of digital advancement to continue in full force. If your library is still lingering in the ’70s with a flatbed scanner and a monstrous copying machine – you have some work to do.

The Future Of Library Technology

Many digital tools have already been established as standard library services. But, some high-tech tools are still waiting for libraries to pick up the pace and get with the times. Once you’ve caught up to the present, you need to start looking toward the future.

These services are either quickly becoming commonplace in today’s libraries or should be looked at as likely possibilities for the near future:

For your library to be successful, you must acquaint yourself with the past, the present and the digital future. The origin of the library came simply from the desire to learn, develop intellectually and find solace in an environment of like-minded people. Library innovations evolved from the needs and motivations of each era’s people.

The evolution of the library is nowhere near completion. We see the technological tides turning constantly, with a new digital device on the horizon nearly every day. If your library is going to remain relevant in the digital age, you must learn from library evolution and continue to transform with the times.

Interested in finding out more about innovative technology to advance your library in the digital age? Click below to download Scannx’s free report, Book Scanning: A One-Stop Solution To Common Library Challenges. 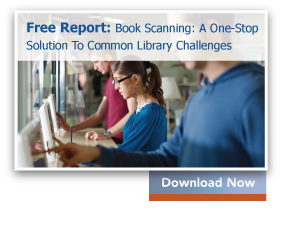